While tourism tops the list of major industries in Greater Palm Springs, the next biggest industry is nearly invisible to the casual visitor: Agriculture.  However, as soon as you savor the culinary delights of some of the area’s trendiest bistros, the agricultural bounty reveals itself. With the nation’s three-decade trend of chefs sourcing produce and products close to home, the farm-to-table movement is center stage in Greater Palm Springs.

Go to the source

Lying well beyond the views from most hotels and restaurants, and just beyond the private walls of exclusive country clubs in La Quinta and Indio’s eastern most boundaries, are acres and acres of date gardens, citrus groves, grape vineyards, infinite rows of bell pepper, lettuces, strawberries, melon, artichokes… you name it! The value of last year’s agricultural production topped $7 million.

The oasis has three growing seasons – fall, winter and spring.  With an abundance of fruits and vegetables grown in winter, when everywhere else is blanketed in snow, the area is known as “The Winter Salad Bowl of the Nation.”

The farming industry, in fact, pre-dates tourism here, with major crops already growing in the early 1900s. California’s date industry, for example, began in the 1890s as a USDA experiment, importing date offshoots from the Middle East and North Africa.  Many of the valley’s major growers are third and fourth generation families such as John Powell of Peter Rabbit Farms, who has been farming the same land for 60 years producing carrots, dates, grapes, eggplant, leafy greens and many other vegetables.

One of America’s pioneers of the farm-to-table movement, three-time James Beard Award winning chef Jimmy Schmidt, has headed up the creative team at Morgan’s in the Desert, La Quinta Resort & Club’s signature restaurant since 2009.

In a recent interview, Schmidt says one of his favorite local crops is artichokes, served fire-charred on Morgan’s menu.

“We work directly with Coachella Valley farmers and the local 4H clubs as well,” he said.  “We use lots of local products – chilies, artichokes, sweet corn, dates, lemons, oranges.”

Indio’s landmark Shield Dates Gardens, founded in 1924 by pioneers Bess and Floyd Shields, is the last working date garden and retail outlets within incorporated city limits. The landmark was purchased in 2005 by the Young and Raumin families, who restored and expanded operations to include The Café at Shields. 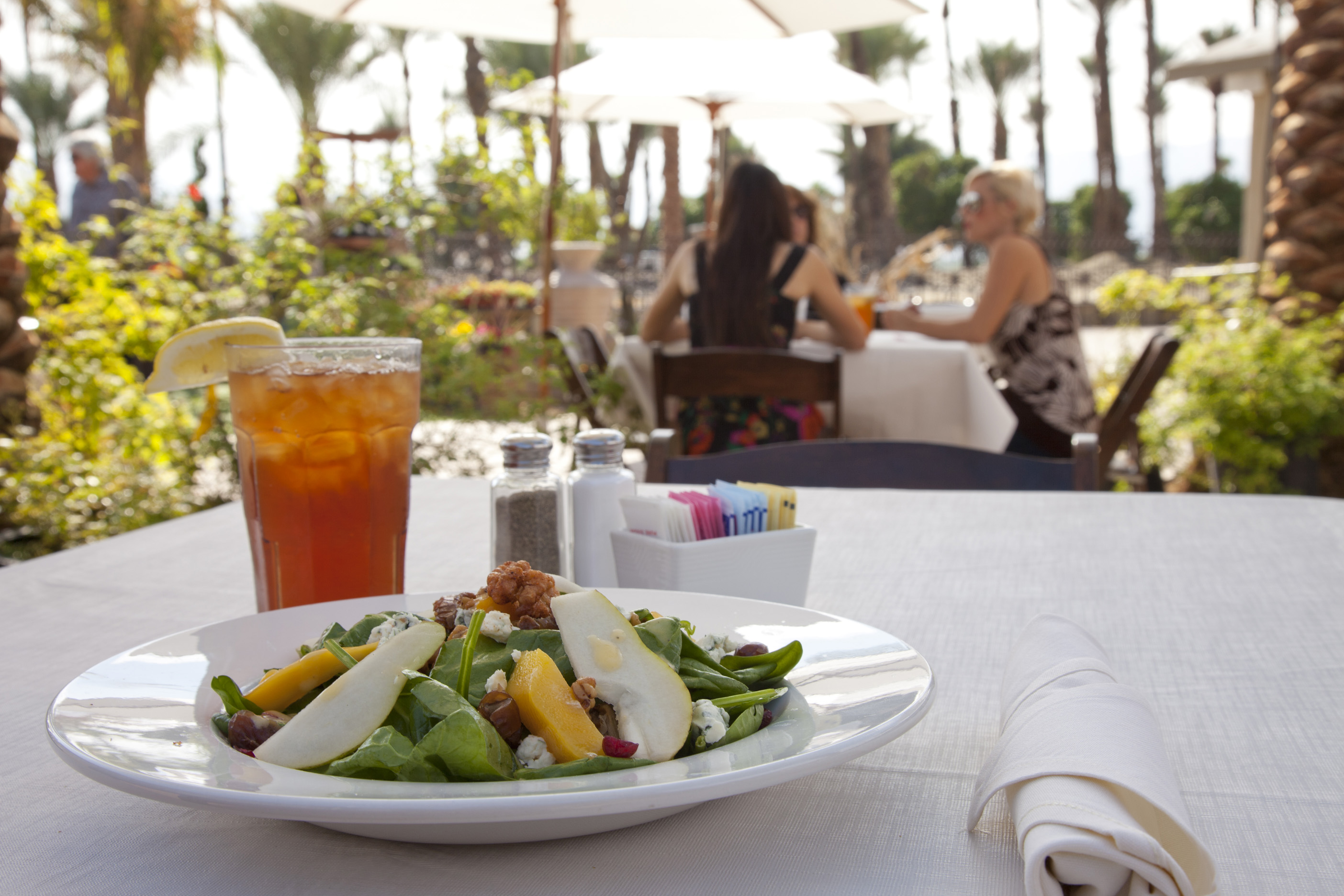 Naturally, dates play an important role on its menu. The café’s signature salad has a healthy mix of spinach, dates, dried cranberries, walnuts, pears and blue cheese crumbles with a house-made mango vinaigrette. The Date Burger is topped with Deglet Noor dates, bacon and blue cheese. A tasty Medjool appetizer is stuffed with blue cheese, prosciutto and wrapped in bacon. A sweet date tamale can be an appetizer or dessert, and, of course, their famous date shakes are still served at the soda fountain as well as the café. 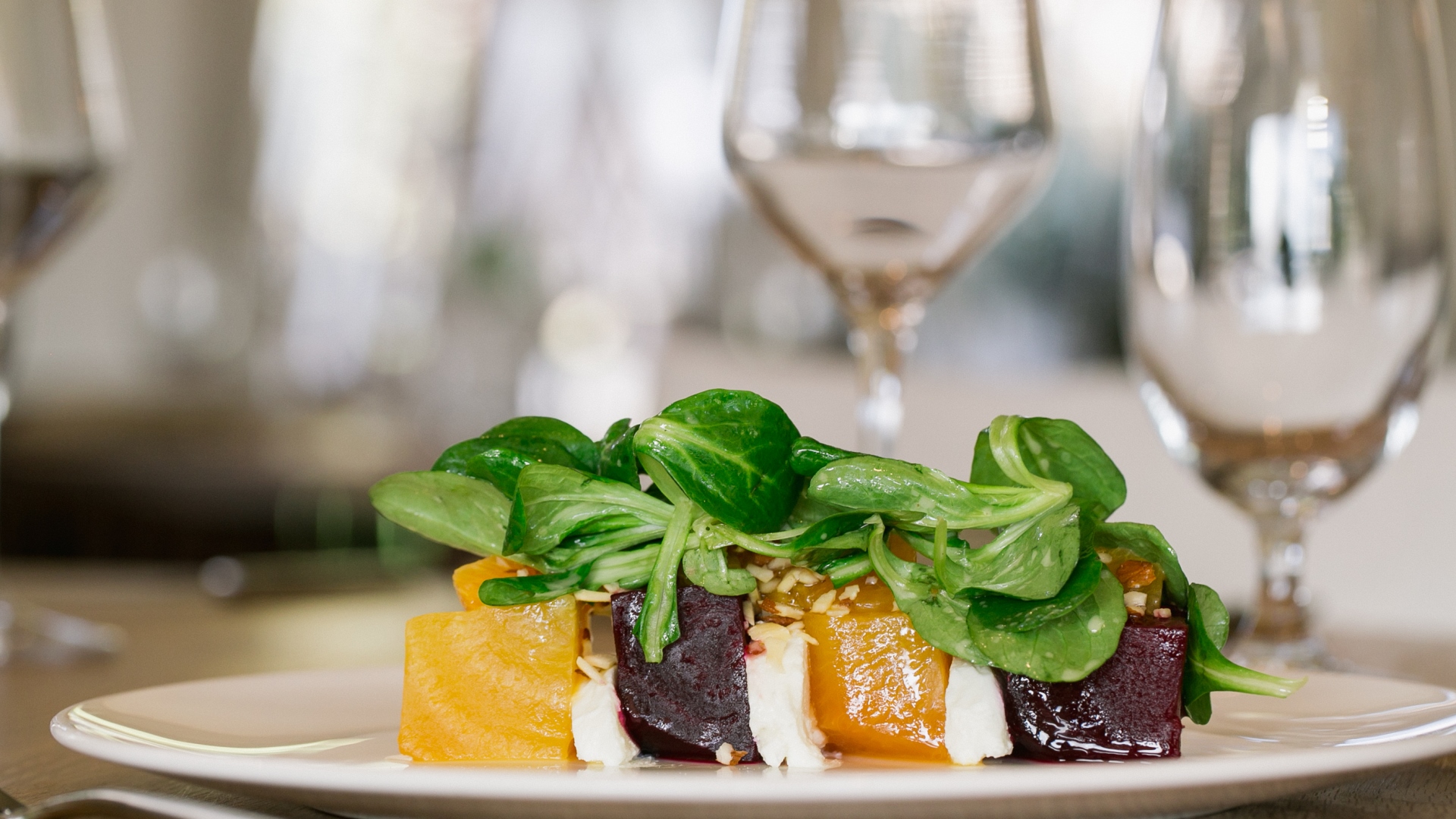 Choices from the spa’s Essense restaurant are vegetarian, vegan, gluten free and nutritional whole foods, prepared “to indulge the palate and seduce the senses.” For example, burrata alla panna is composed of arugula, Indio heirloom tomatoes, strawberries, in a basil emulsion and balsamic glaze. Gluten free Beef Mignon is paired with green and yellow zucchini and whole grain mustard with a goat cheese polenta and local corn aioli.

Artisanal cocktails such as The Ancient Mariner use local grapefruit and limes with rums and spices for a drink inspired by a classic navy grog. And The Bees Knees, a prohibition-era cocktail made bright and complex, employs lemon juice and fresh local honey with top shelf gin.

The creative Palm Springs hotelier/restaurateur Tara Lazar is a game changer for local restaurants, one of the first to source ingredients within 100 miles of the Greater Palm Springs area.

With lines down the sidewalk at her trendsetting Cheeky’s breakfast and lunch spot, find breakfast made with organic eggs, flights of smoked and cured bacon, home-made pastries and fresh-squeezed juices. Next door is Birba, an outdoor restaurant with its pizza oven bringing forth tasty concoctions using local ingredients like broccoli, asparagus, braised greens and chilies.

Of her newest ventures, Chi Chi at the Avalon offers hip California cuisine with a distinct Latin flair, geared toward the hotel’s health and nutrition precepts. Enchiladas with braised collard greens, and the Yerba Mate salad with fennel, frisee, kale and quinoa topped queso fresca, are some examples.

“Depending what they have, I will make a Ratatouille Provençal with the squash and zucchini and tomato or I will stuff a tomato with baked eggplant puree with fresh basil and, of course, I buy the (organic) eggs for my desserts,” said Pelech.

Cathedral City’s charming Cello’s Bistro, owned by Bonnie Barkley and Tom Stefernak, sources locally whenever possible for the American bistro cuisine. But perhaps the most notable are the lemons, figs and oranges that turn up in Tom’s signature Limoncello (for which the restaurant is named), their Drunken Fig Jam and orange marmalade. 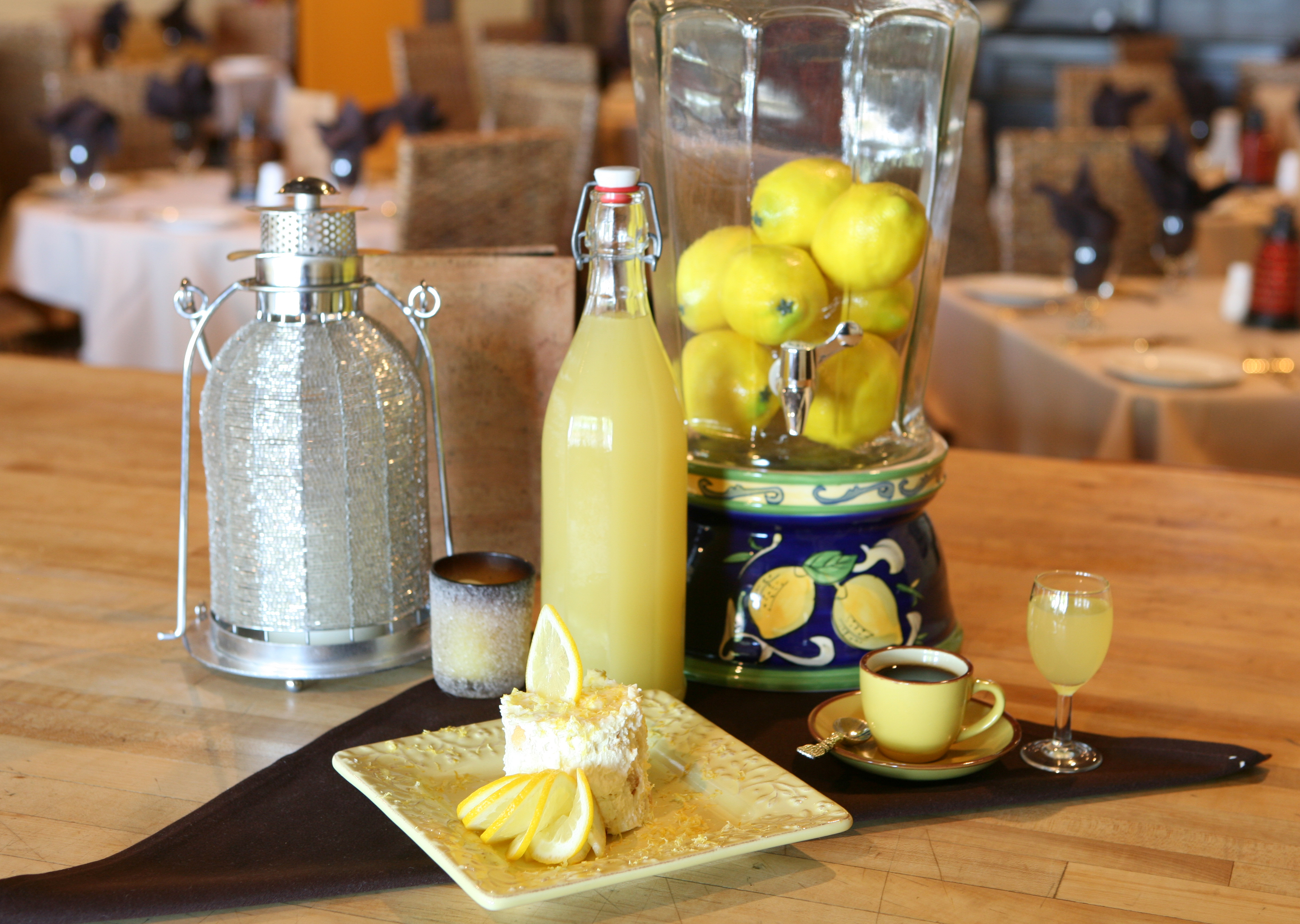 During his first few years in Greater Palm Springs, Robert Nyerick, former chef at the Miramonte Resort & Spa, created the resort’s Grove Artisan Kitchen, for which he grew herbs, vegetables and citrus on property to be used on the menu. Nyerick continues to be a huge proponent of the farm-to-table movement now as executive chef at Omni Rancho Las Palmas Resort & Spa in Rancho Mirage.

Working closely with Chef de Cuisine Brandon Testi at the resort’s bluEmber, they source from produce supply companies to create such dishes as Caesar salad made with whole ribs of romaine lettuce topped with shaved parmesan, croutons, creamy garlicky dressing and fresh anchovies; and, in season, whole steamed artichokes, split in half and grilled are served with a drizzle of fresh lemon. 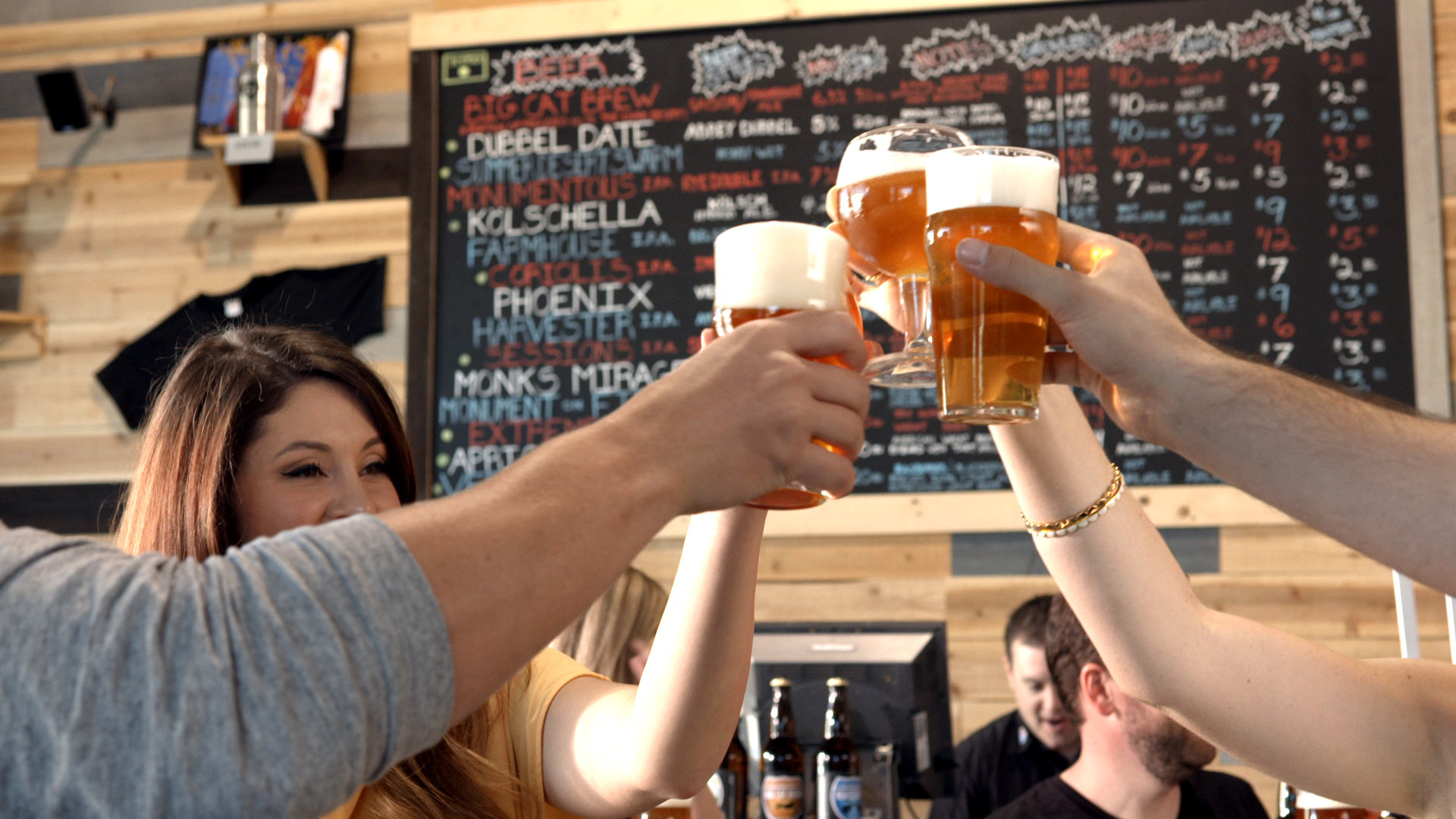 “Our lager, Phoenix, is made with Medjool and Deglet Noor dates from Hadley’s Date Garden, and our Imperial pale ale style called Harvester is made with Rio red grapefruit from Sea View Farms,” said Anderson. ”Sea View provides most of our citrus such as limes and tangerines. Our Mayahuel brew is made with blue agave, Persian lime and tangerines, all sourced within the Coachella Valley.”